so much has happened at the new house. the walls came down!  you can get a much better sense of how big the kitchen is going to be, although the photos don’t really capture that. 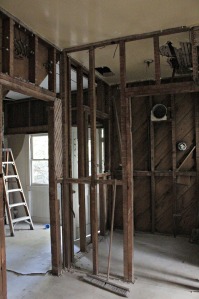 this used to be the bathroom! this photo is actually old – the room has been framed in.  every time i stop by the house, there is something new! 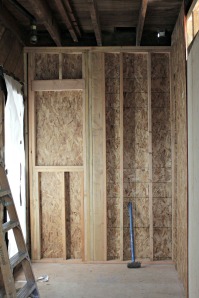 this was the doorway down into the basement . . . soon to be my pantry! 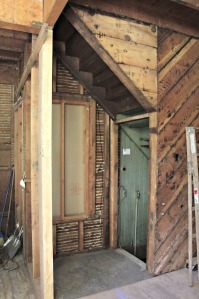 i didn’t get my hgtv moment with a sledgehammer, sadly. the contractor is trying to save as much of the original materials as possible. but there is plenty of new lumber going in . . . many many beams. the backyard looked like a lumberyard for a few weeks. 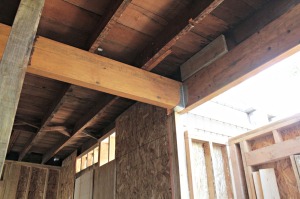 and a new ceiling for the addition. 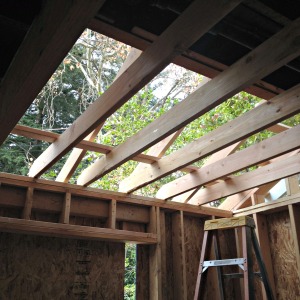 we found some fun stuff when we opened the walls. here you can see the back of the old plaster and lathe wall, and the back of the curve of the beautiful coved ceiling in the family room. 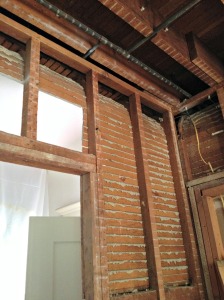 and these look like stickers or maybe some old wallpaper. the new venting and pipes are going to go in this nook, replacing the old brick chimney that served as an exhaust vent from the furnace in the basement. the chimney that likely was leaking CO2 and all sorts of terrible fumes into the house. the chimney that was about falling down, a complete hazard. the chimney whose bricks will someday form a raised bed for my tomatoes in the backyard. so many problems solved in one swoop. 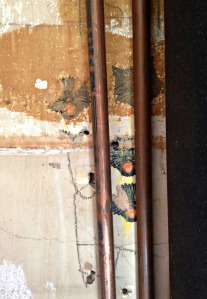 this is the old sash weight for the window – we think it is original to the house given its condition. most of the windows in the house are double sashed, and the weights help move the big heavy windows up and down. 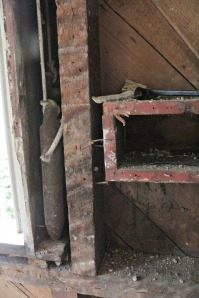 some of the things we found in the walls were of slightly more recent provenance. such as the many beer bottles and cans from the downstairs bathroom addition! the contractor seems to think they explain quite a lot about the quality of the construction, which was probably in March 1950 according to the newspaper clippings we found.

we’re going to have them wall up a nice empty wine bottle as our own little time capsule for whoever comes next and decides my white subway tile just must go!

the back of the house is another transformation. the deck came down – slightly dramatically with one of the construction workers standing on it! luckily, he is doing just fine, only a little banged up. certainly sped up the demo process, even if it was unintentional. 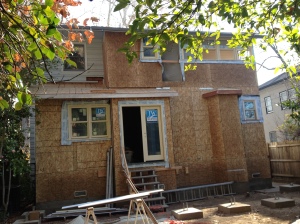 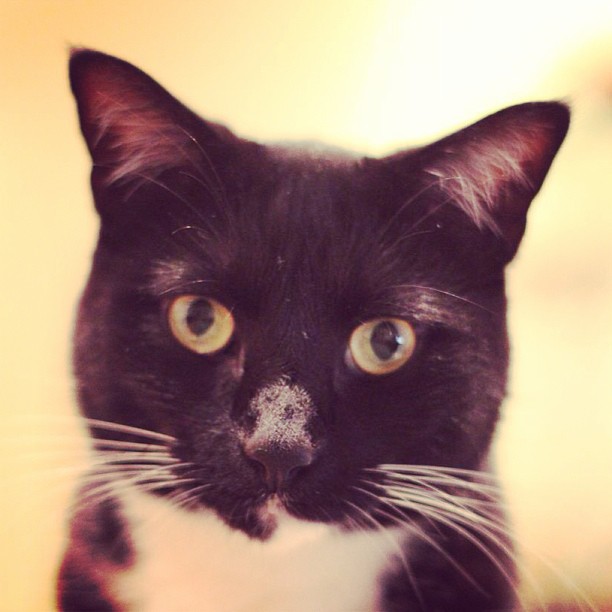